Art of Fencing, Art of Life

In Equipment, Health, Rules and Regulations

There are some general fencing safety rules that all fencers should follow, though sometimes they aren’t as obvious as we imagine they should be!

Fencing is naturally a sport of weapons. Despite this, it’s consistently one of the safest sports that anyone can participate in, regardless of age. Many people are shocked to realize that sports like soccer and gymnastics have much higher rates of injury. The most dangerous part of fencing actually isn’t from swords at all, it’s from muscle strains and other sports related injuries.

That being said, there are some safety instructions that every fencer should be aware of. Many of you have heard these before, but it’s never a bad idea to review them again and again. Naturally your coach will have additional rules that you want to be aware of and follow, and always apply your best judgement

Also, it is very important to realize that safety is not only a concern for the fencers themselves, but also for anyone around them. It is equally important that parents, siblings and other people visiting a fencing venue follow fencing rules. For example, don’t allow your loose toddler to run towards a strip when people are fencing there. Even if they themselves follow strict fencing safety rules, a small child who is running through can get hit. It is super important that anyone who happens to be in the fencing venue respects and follows safety rules.

As it is impossible to state all situations and conditions, a good rule of thumb for fencing safety is this –  make sure there enough space between an unprotected person and a person with a sword. Always. Use your best common sense and judgement.

END_OF_DOCUMENT_TOKEN_TO_BE_REPLACED

In Coaching, Equipment, Rules and Regulations

A fraud issue that we’ve heard reported at major competitions is also one that many fencers are afraid to talk about. It’s hard to call out fellow coaches on bad behavior, and it takes a brave person to do it. You might have seen some of these same things happen yourself, but either didn’t know what to do or maybe were too timid to confront the individual.

Luckily, we have a guest poster who isn’t afraid to tackle the tough issues in fencing. Read on to learn more about one of the dark sides of high level fencing competitions that no one is talking about, but that we should all be more aware of.

This opinion piece is offered to us by Coach Yakov Danilenko, head coach and owner of the Medeo Fencing Club. We think that his perspective is an important one to share!

END_OF_DOCUMENT_TOKEN_TO_BE_REPLACED 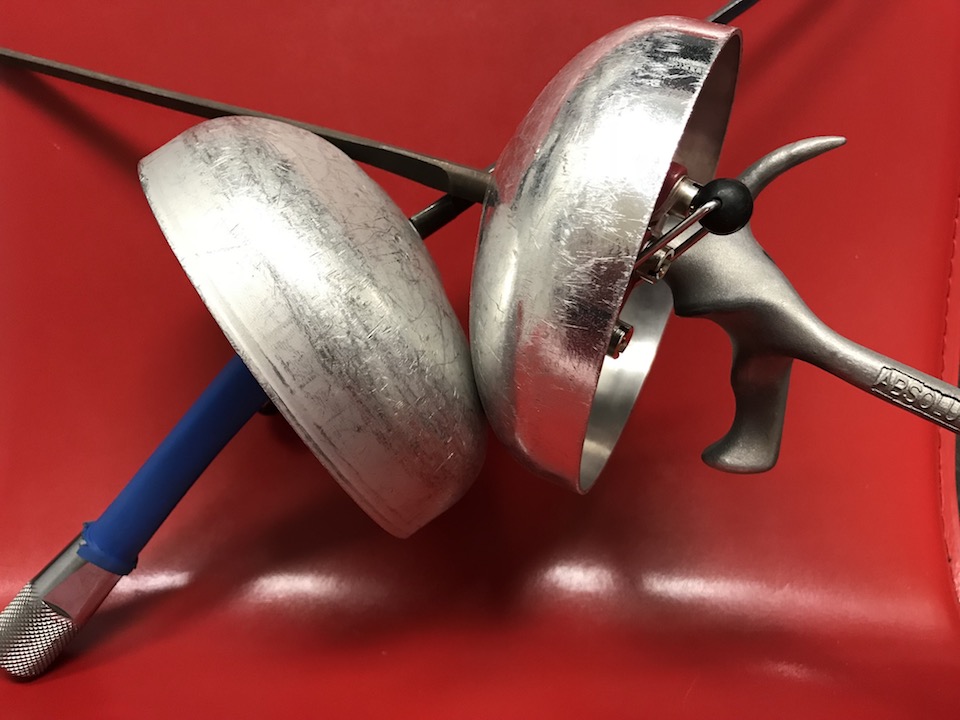 The nuance of fencing becomes automatic to people who have been in it for a long time, but to newcomers, whether fencers or parents, the terminology can sound very unfamiliar. The detail can be challenging to master for those who are new to it. Epee grips are one of these instances.

Often it just takes a clear, simple, high level explanation of what these things mean to facilitate mastery of the concept. A newbie might still not totally understand the intricate differences, but it lays a solid foundation that can inform fencing in the future.

The grip is simply the part of the fencing sword that the fencer holds. Think of it as being the other side of a handshake, the place where the sword unites with the fencer to become an extension of their own body. How that interface happens is important, and over the years there have been many various grips developed by fencers. It is one of the most important parts of the fencing sword  because the comfort, agility, mobility, strength, reach, and many other factors are affected by how the hand holds the weapon.

Over the centuries, grips have been developed by master sword makers to to uniquely address different facets of fencing and different styles adopted by fencers. In modern fencing there are two primary grips, namely the pistol and the french grip. Those two are actually broad categories however, and there are variations on each of the grips. Eventually each fencer chooses her or his own style, or modifies an existing grip to suit their own style.

Almost every fencer will start fencing with a french grip, whether they are a foilist or an epeeist. This is because the french grip handle “forces” a new fencer to correctly hold the weapon and to work with their fingers. Those novice mistakes in holding technique are much more visible to a coach with a french grip  and thus this grip provides a better mechanism for a coach to correct such mistakes.

Eventually with experience, foil fencers will transition to the pistol grip, while epee fencers will split into two major camps – french grip fencers and pistol grip fencers. It means epeeists have the luxury of choice, and neither is strictly correct or incorrect. That choice can be challenging if you don’t understand the good and the not so good of the two mainstream epee fencing grips.

Let’s break down the advantages and disadvantages of each.

END_OF_DOCUMENT_TOKEN_TO_BE_REPLACED

How to Safely Pack Your Fencing Bag with Wet Clothes

In Equipment, For Parents 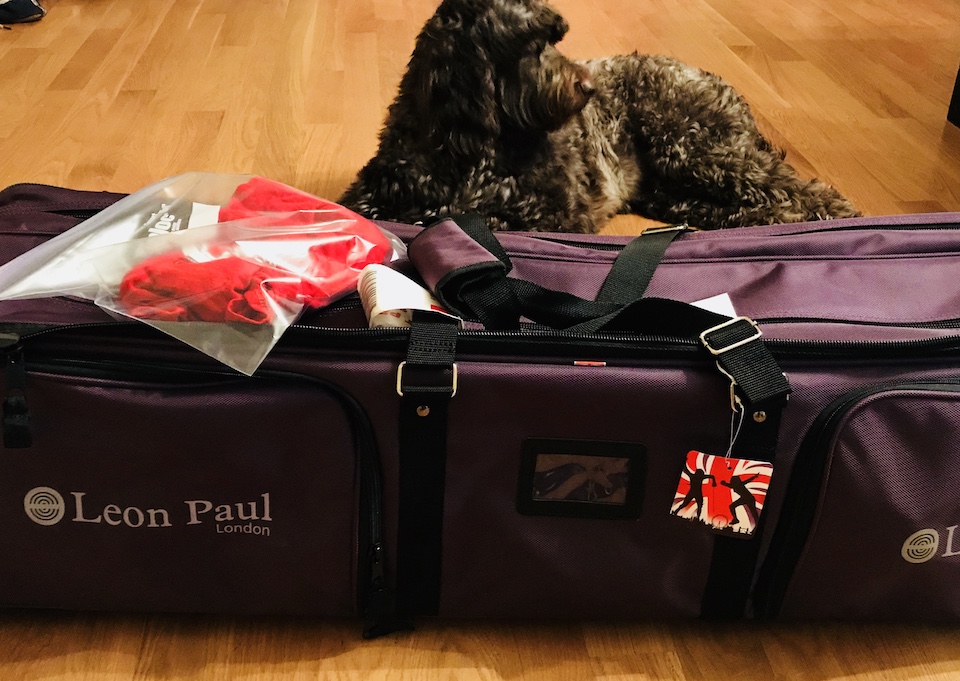 Fencing clothes get wet. Not wet like swim trunks or rain jackets, but wet from the heaping amounts of sweat that pour out of a fencer’s body throughout the course of a strenuous practice in thick gear.

The real deal with sweat

First off, let’s talk about sweat.

There is something deeply satisfying about getting in a hard workout at the fencing club. Running up and down the strip, feeling those muscles tense and release, it’s good stuff! That good stuff also produces smelly, wet stuff in the form of perspiration.

Sweat in and  of itself is basically water expelled from the skin in order to cool the body down. There’s not actually bacteria in the sweat itself, rather it’s the bacteria on our skin that mixes with the sweat and digests the small amounts of sugar in it that causes the odor.

There’s no reason to feel crazy about sweat, our bodies are meant to do this. It’s healthy to sweat. What’s no healthy is for that sweat and bacteria to stick around and smell like a rhinoceros as a result. The odor gets worse the longer fencing gear stays sweaty, not to mention the risk of bacteria getting out of control. Getting rid of the bacteria and keeping fencing equipment dry should be a priority.

END_OF_DOCUMENT_TOKEN_TO_BE_REPLACED

The anatomy of a fencing sword 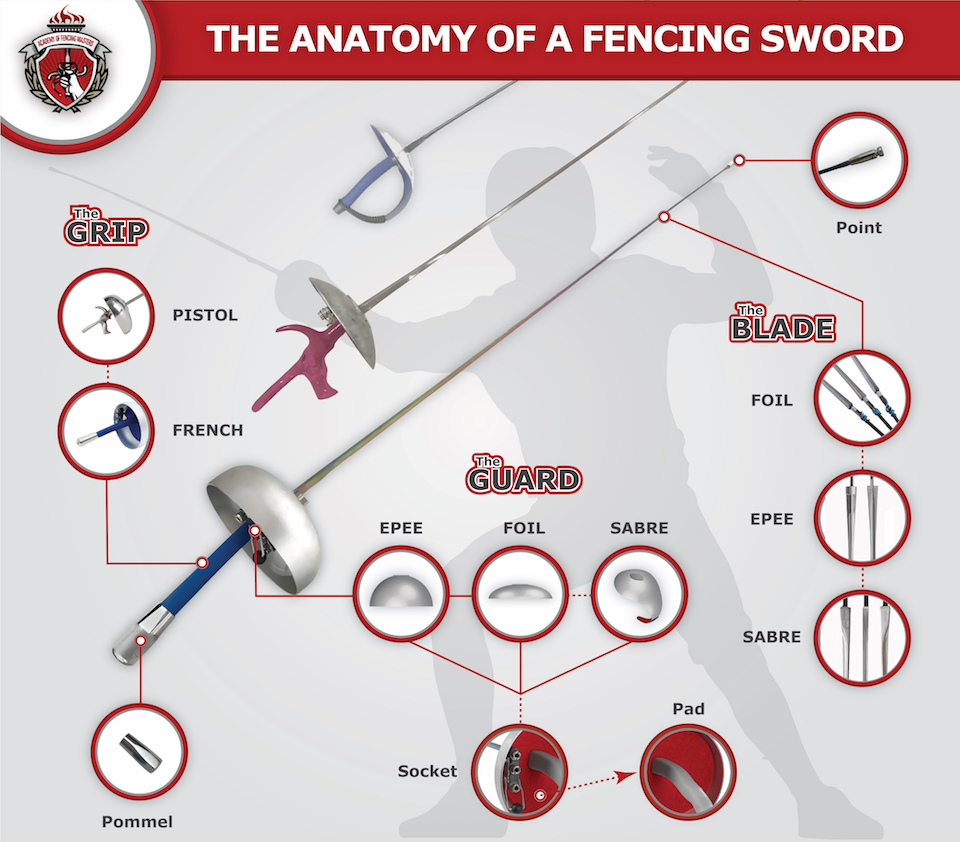 Fencing as a distinct form of combat goes all the way back to the 12th century when fencing schools started to spring up in Europe. Even to those first fencers the sword was seen as extension of the body. Fencing swords are more than just pieces of metal, they are pieces of us.

To the uninitiated, a fencing sword is a long piece of thin metal with a handle and a guard. It looks quite simple on the outside, but every piece and part of the fencing sword has a name and a purpose. These weapons were developed over the course of centuries of consistent use, and let’s just say that fencers have become detail oriented about their weapons.

New fencers might not know the names of all of the parts of their weapon, but it’s knowledge that helps fencers to become true masters of this art. So let’s review the parts of the fencing sword! We’ll start at the bottom and work our way up.

END_OF_DOCUMENT_TOKEN_TO_BE_REPLACED

From Underdogs to World Leaders in 20 years. Available on Amazon

Parents Guide to Fencing: Everything You Need to Know to Start Your Child in the Sport of Fencing

Guide to US Fencing National Tournaments: NAC's and Championships

Everything you find on the AFM blog is free from copyright. You are free to copy, translate, change, sell – whatever you want. If possible please link back to our original source.

AFM Newsletters – Read to see what’s going on in the club!